The History of Ayr, Ontario.

The village later to be called Ayr, on the Nith River, was originally a group of settlements, Mudge’s Mills in the centre, Jedburgh to the east and Nithvale to the west, that eventually combined into one as they expanded. The name Ayr was first used in 1840 when it was assigned to the post office.

The territory in this area, eventually to be the township of North Dumfries, consisting of 94,305 acres, had been sold to Philip Stedman in 1798 from Joseph Brant of the Six Nations. Ownership transferred to Thomas Clarke and then, in 1816 to William Dickson a wealthy immigrant from Scotland

Absalom Shade was the only individual land owner in the area of the junction of Smith’s Creek (now the Nith River) and Cedar Creek in 1822 and the first actual settler was Abel Mudge, initially as a squatter. He built a dam, a sawmill and a grist mill. The Nith River and Cedar Creek were useful for powering mills. Most subsequent settlers at Mudge’s Mills were Scottish, farmers, artisans or tradesmen.

The settlement at Mudge’s Mill was laid out by James Jackson, the first settler, with J. R. Andrews, and Robert Wyllie in 1839. A post office opened in 1836, called Ayr after a town in Scotland. The other two settlements were not a part of Ayr but received their mail at the single post office. The Smith’s Canadian Gazetteer of 1846 describes Ayr, population 230, as containing two churches, a post office receiving mail once a week and businesses such as a grist mill, fulling mill and carding machine, a tannery, two stores, a blacksmith, two shoemakers, two tailors, one cooper and two carpenters. 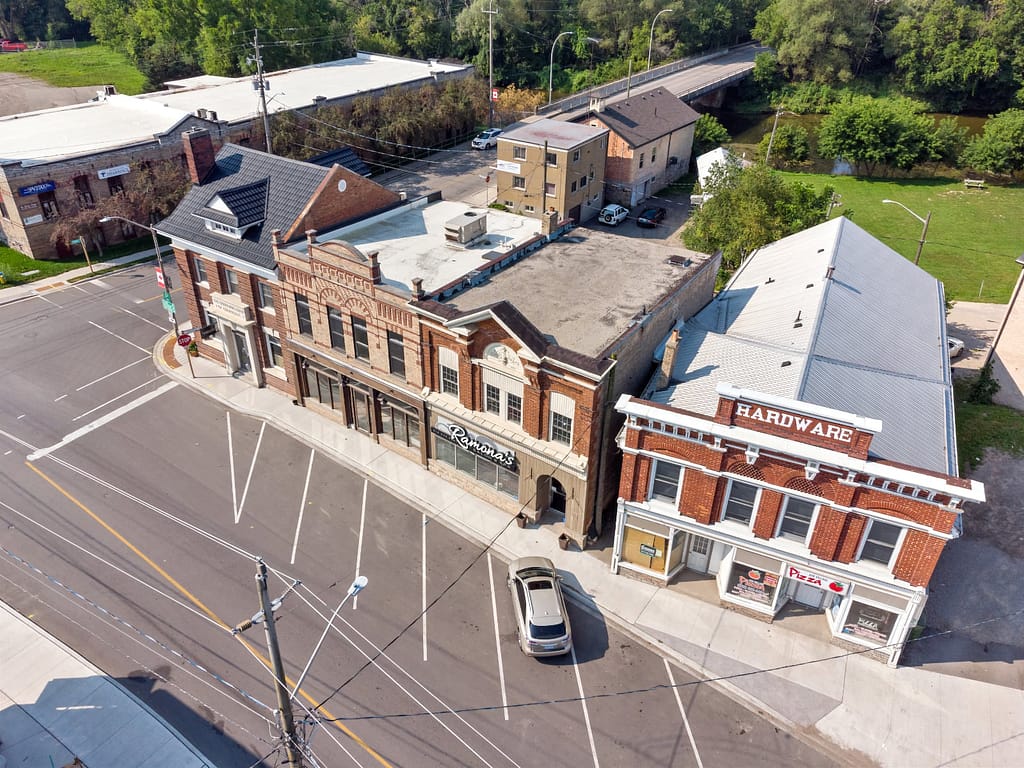 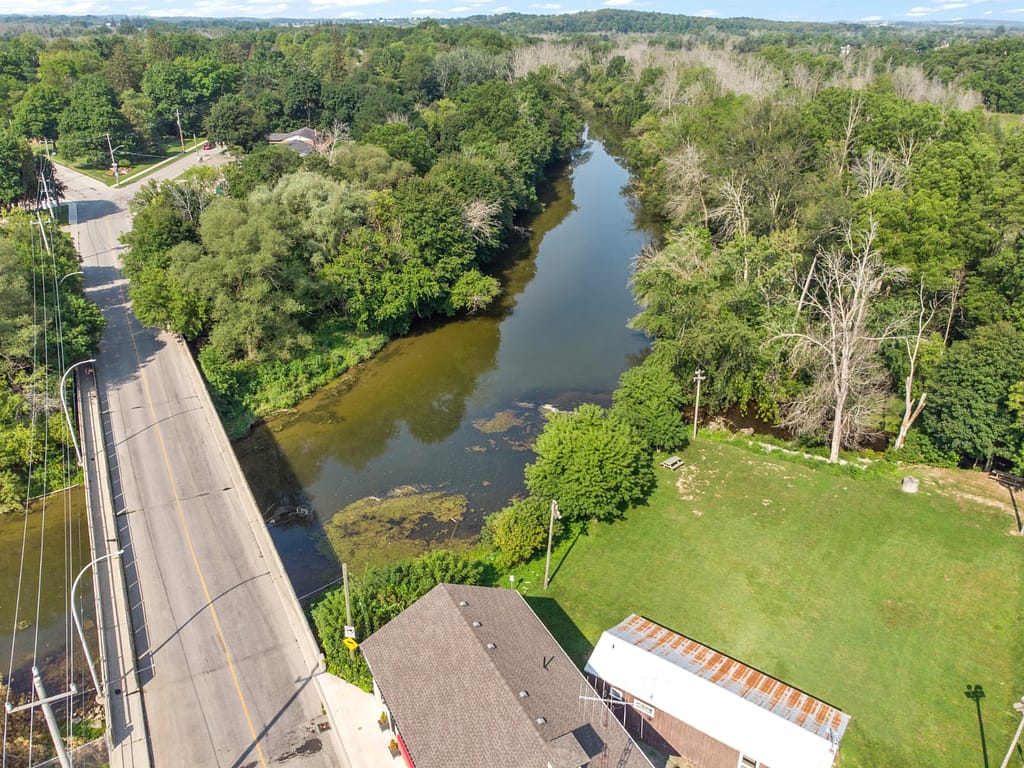 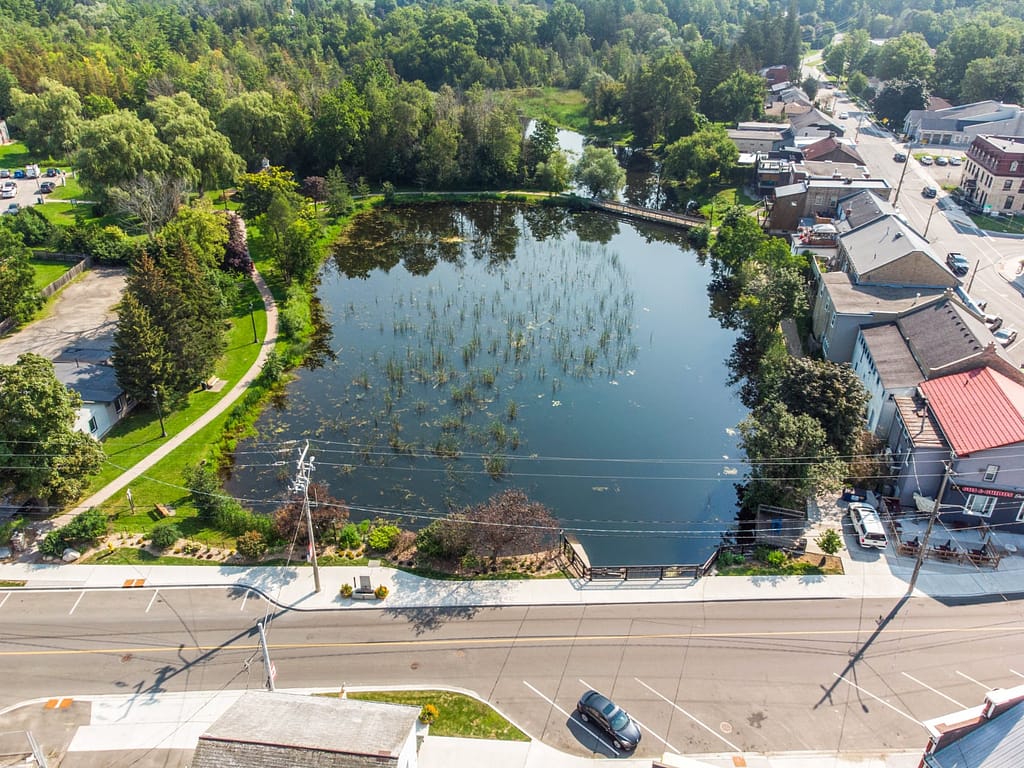 The largest business in Ayr for many decades was a foundry. In 1849, the John Watson Manufacturing Company (later Ayr Machinery Works) was already making threshing, mowing, reaping and other farm implements. By then, the population was 700 and a newspaper and library were operating. The town-hall was built in 1850. 1850 A large furniture factory also opened at about the same time. There were also five flour mills in the three communities that later formed Ayr, a very large sawmill and a wool mill by then. Watson’s company was very successful, shipping agricultural implements across the country by 1864. By 1850, a good road to Galt had been built and a railway had reached Galt, some distance from Ayr. During that time, goods for export were taken by ox carts to the train station at Paris, Ontario. The town hall was built in 1850 and a fire department was started the same year.

By 1854, the village had a small library, two school houses, a fire company, a newspaper and a single (Presbyterian) church. In addition to the major farm implements manufacturer, other businesses that were operating in 1864 included grist and saw mills, five flour mills, a woollen mill, stores and a furniture factory. The population was 1000, there were five churches, a fire company, a weekly newspaper and a large school with students from primary to senior level.

The village got a rail line from the Credit Valley Railway in 1879; which helped facilitate the importing and exporting of goods. Jedburg and Nithvale were absorbed into Ayr in 1884 when the village was incorporated, with foundry owner John Watson as the first Reeve.

By 1888, the streets were lit with coal oil lamps and concrete sidewalks were installed in 1901. A large library was built in 1909 with funds provided by a Carnegie grant. Ayr was declining by around 1910 and some of the population moved to nearby Berlin and Preston. Starting in the 1950s and still continuing, new homes were built for commuters helping to increase the population.

In January 1973, Ayr was incorporated into the Township of North Dumfries and the Regional Municipality of Waterloo.

Find your new home in this beautiful region.

I could not imagine going through this process with anyone other than Susie. Her level of client support is second to none. She advised as best she could, and kept us reasonably calm while securing our dream home in crazy market with 12 other bids. And when it came to getting our old house ready for sale, she truly went above and beyond. If you are thinking about moving, give her a call!
by Tara Tohivsky

Good Morning Susie We would like to thank you for everything that you did for us during the sale of our house and the purchase of our new home!  You went above and beyond in more ways than one!  From painting and staging to cleaning and helping move. We couldn't have gone through this experience without your help.  Thank you so much!
by The Harris'

We recently were looking to sell two homes and buy our dream home in Ayr. Neither of us were really looking forward to the prospect of selling our homes but Susie made it easy. She was with us every step of the way and guided us through the whole process diligently and professionally. She even made arrangements for my dogs when they were showings when I was working. I can’t say enough about all her help and advice. Susie never failed to answer any question, answer our calls, emails and texts that we continually sent her. She made the whole process pretty painless. Needless to say, we were able to sell both our houses and find our dream home in Ayr which I am not at all sure we could have done without Susie. We are forever grateful for all her help and advice along the way. We recommend her to anyone we know who is thinking of selling and/or buying as I honestly don’t think you can find a more personable, honest, hardworking, friendly person to guide you through the whole process We are very proud to consider her as a good friend and can’t say enough good things about her. In our opinion, she is the best agent around and also an amazing person.
by Darlene Conforzi

Please enter your username or email address. You will receive a link to create a new password via email. 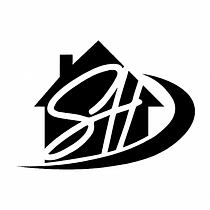 Let's have a chat

Send me your contact info and I will get right back to you.